10 Most Used Cars in Cameroon (Price and Benefits)

In this article, we will look at the top 10 most used cars in Cameroon and try to give an idea of their average prices and benefits.

The automobile industry in Cameroon is an interesting one, principally because the country relies entirely on imported cars, as there are currently no car manufacturing plants in the country.

In this article, we will look at the top 10 most used cars in Cameroon and try to give an idea of their average prices and benefits.

10 Most Used Cars in Cameroon (Price and Benefits)

Modes of Transport in Cameroon

Before we dive deep into the most used cars in Cameroon, let’s first take a tunnel view of the different modes of transport in Cameroon.

1. There are no metro lines in the country, and the railways are unreliable, dangerous, and archaic

2. The air transport system is criminally underdeveloped and usually too expensive for most

3. Traveling by sea is not practicable, except for transporting huge masses of goods along international hubs.

Car transportation is more or less the unique means of transportation for commute purposes. However, motorbikes have gained huge popularity either as a means of beating the endless traffic jams in urban areas or managing the usually deplorable earth roads and tracks in rural areas.

Notwithstanding, many cars get shipped into Cameroon daily, ranging from brand-new luxury rides, Porsche SUVs, and sports cars to used vehicles that first got into circulation more than 10,15, or even 20 years ago. However, the state has been making efforts over the years to limit the number of old-generation cars that enter the country by instilling restrictive measures.

According to official records, about 3,752 cars were sold in Cameroon in 2016. This figure dropped drastically to about 1,818 units in 2021, partly due to the shrinking economy and the effects of the Global covid-19 pandemic.

In general, the most famous automobile brand used in Cameroon is Toyota which holds more than 55% of cars in Cameroon, followed by Mercedes, Suzuki, Mitsubishi, and Hyundai. Many Peugeot and Renault cars are also visible on the streets of towns and cities in Cameroon.

Most Used Cars in Cameroon

Toyota Hilux overtook the longstanding favorite, Toyota Landcruiser. By far the most used car in Cameroon, Toyota Hilux sales amounted to no less than 346 units in 2021 alone, representing about 20% of the total car sales that year. It is the preferred choice for many organizations, businesses, and individuals.

The price of a Toyota Hilux ranges from 4 to 30 million francs (6000 to 46000 USD) depending on whether it’s a used car and its manufacture date.

The Toyota Hilux is one of the most trusted pick-ups; this is clearly due to its solidity and adaptability. A Hilux can be anything from a work truck or a business companion. Also, many people use them as family vehicles due to their increasingly impressive comfort and safety features. The more recent generations of Hilux models have outstanding design & safety parameters.

Toughness and durability are the Toyota Hilux trademark quality, and with a high cargo-carrying capacity, there is little wonder why the Hilux is the preferred car type in Cameroon.

Fun fact: the Toyota Hilux is the only car driven to the Earth’s magnetic north pole and magnetic south pole.

The Toyota Land Cruiser is an absolute Legend in Cameroon! As an off-roader, or a go-all, do-all kind of car. There aren’t many SUVs that move around with the prestige and panache of a land cruiser. Not the most economical automobile, owing to its V6 and V8 engines, but the comfort and space of this imposing metal structure will make any onlooker stare. Land cruisers come in 2 or 3-row seats, with a capacity of 5 or 8. The more recent ones have an upscale feel, impeccable comfort, and a sound system that will make you dream. What about its heating system? Say no more!

The Toyota land cruiser has enormous Cargo space, making it the leading choice for a family vehicle if you can afford it. As for its performance, all land cruisers are four-wheel Drives and offer smooth and comfortable driving dynamics, capable of pulling more than 8 tonnes of weight.

When you think Sedan Cars, think Corolla. The world’s most-sold brand is well-represented in Cameroon. The different generations of corollas, ranging from Vitz, Verso, and the different versions of the E series, are very popular cars in Cameroon. Whether they are being used for commercial purposes like taxis, private rentals, or inter-urban commute options, these are the go-to options for most small business owners, cooperate houses, and middle-income earners in the country. The wide array of corolla options allows almost everyone to pick a car according to their means.

Although corollas don’t offer much space, comfort, and security, most are well suited for commercial purposes owing to their very low-fuel consumption capabilities and extremely affordable maintenance cost. Corolla offers essential car features, like air-conditioning and decent infotainment (touchscreen in the 2017 models and above). One very striking feature of corolla cars is their good looks and plush interiors as you move up the development ladder.

In many ways, this is the SUV you want if you can’t afford other larger and more expensive options in Land Cruisers or Ford Explorers. It has a higher raise and much bigger space on offer compared to the corollas, but it can be an imposing presence both on the highway and off-road. Clearly not as solid as other SUVs in similar generations, the Rav 4 is a step above Sedan type cars like Toyota Runx and directly comparable to the Nissan Qashqai and Honda CR-V.

The one-time best-seller brand is making a significant comeback with a more spectacular outlook and better performance through its hybrid engines for the 2021 versions and above, making the Rav 4 considerably more fuel efficient.

Next on our list of Most used cars in Cameroon is the Mercedes Family. Say what you will, but there’s no arguing that the Mercedes Benz brand is one of the most legendary brands regarding absolute show of Class, comfort, and power! The German car manufacturer has a wide array of top-dollar selections beginning with the Sedans of the A-class to the C-class, passing through the high luxury, high-performance E-class to the full body SUV G Class. With such a big line-up to pick from, the G-Wagon is probably the most prestigious high-end full body SUV seen quite frequently in Cameroon. While others, such as the 4matic, have better traction and smooth handling on rough roads, allowing each tire to react individually to adapt to different road conditions.

Many Cameroonians are lovers of sedan-type cars, which is evident in the sheer numbers involved. The Avensis and Camry brands are also very popular in Cameroon. Perhaps due to the space, comfort, and interior designs, these two cars are a proper option for large families who may be too many for a corolla type. The significantly larger cargo space and more spacious second row of seats play a very important role with these cars that are also well equipped.

We decided to place these two Korean SUVs on spot number seven as it took a lot of work to separate them. For every Santa Fe bought, there seems to be a corresponding Tucson. These cars are comparable to Rav 4 but more comfortable, spacious, and interactive than their Japanese counterparts.

There are not very good on bumpy roads, so they are not a good option if you are looking for an off-road vehicle. 2010 versions of these Korean pair can be obtained for about 6 million francs while the more recent Hyundai Santa Fe can get a very good 18 million Francs, making these cars one of the cheapest SUVs in the midsize range. The 2022 Hyundai Tucson costs slightly more.

A pretty popular SUV suitable for a small family vehicle, the Suzuki has good consumption but is not so flashy in terms of its interior. The Suzuki has a relatively large boot for its small size, but the driving experience isn’t as smooth as the similar size and generation counterparts.

The fuel consumption is quite friendly, and its media and connectivity options are rather unspectacular. The Basic trim is around 17 million francs (27 000 USD), while the Vitara Turbo All grip is about 25 million francs (40 000 USD). Earlier versions of the Suzuki Vitara can be gotten for as low as 5 million francs.

Now, this is a bit of a surprise! For a country whose history and France greatly influence culture, Renault is the first entry of a French brand on position number 9. Although this brand has been a mainstay in Cameroon’s automobile landscape, Renault climbed in 2021 car sales in Cameroon as it was the second most bought car with more than 300 units sold.

The most popular is the Renault Duster, a mid-sized SUV; Renault Kiger and Renault Triber can also see along the streets of major cities in Cameroon. The Renault Duster 2022 can be bought for about 15 million Francs. Again, not the best type of vehicle for off-road purposes, but it’s a decent choice for small families in an urban setting.

Finally, to close our list of the 10 most used in Cameroon, the Mitsubishi Pajero. Although other Mitsubishi models, especially the Sedan types, are also popular, the SUV Pajero has been a popular go-to option for several decades.

Its surprisingly elegant and roomy interior gives its occupants a cosey feeling. With extra comfortable and smooth driving, this big-sized SUV is perfect for a large family, especially for long trips and excursions, as the space on offer will make you feel right at home throughout your journey.

The 2023 Mitsubishi outlander costs around 20 million francs, but you can have earlier versions of the now out-of-production Pajero for 4 or 5 million francs. The Mitsubishi range of vehicles is known for their low fuel consumption properties. A majority of Mitsubishi SUVs come 3-row seat arrangement.

Although we have picked out just the top 10 most used cars in Cameroon, it is worth noting that virtually every car brand plows the streets and highways in Cameroons Cities. More luxurious brands like Chrysler, Chevrolet, Infinity, General Motors, less fancied Nissan, Peugeot, and the like, can be seen cruising here and there. You can also count a fair number of Hummer, Fiats, and Ford cars on the country’s roads.

This classification didn’t consider heavy-duty vehicles like cargo trucks, dump trucks, and buses used for inter-urban transportation and transportation of Goods and services.

I hope you enjoyed reading this compilation; please let us know your thoughts about classification. 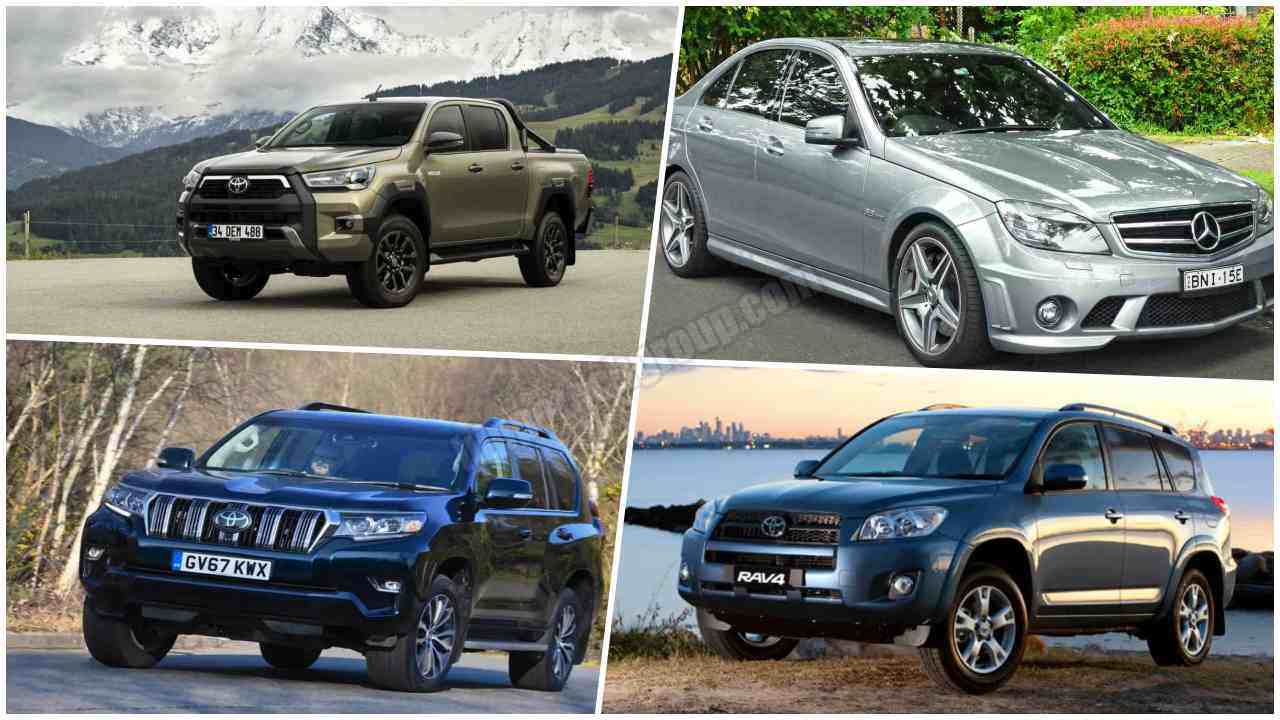 Afghanistan,4,Africell,2,Airtel,5,Android,12,Apps,11,Blogging,7,Business,23,Cameroon-Info,123,Camtel,6,Central Africa Republic,1,Daily Devotions,9,Education,20,Etisalat,2,Fashion,4,Gabon,4,Ghana,6,Health-Tips,23,How-To,41,Huawei,8,India,1,Infinix,2,IOS,13,Job Alerts,19,Kenya,1,Lesotho,3,Liberia,12,Lifestyle,9,Malawi,8,Mozambique,2,MTC,2,Mtn,31,Namibia,2,Network,75,Nexttel,5,Nigeria,9,Orange,23,Other-Brands,5,Phone-Reviews,20,Qcell,2,Rwanda,3,Samsung,1,Seo,2,Sierra Leone,7,South Africa,6,Tanzania,6,Technical-GCE,4,Tecno,3,UAE,2,Uganda,6,USA,3,Vodacom,2,Windows,4,Xiaomi,4,Yoomee,2,Zambia,3,Zimbabwe,1,
ltr
item
HIPPOTECH GROUP: 10 Most Used Cars in Cameroon (Price and Benefits)
10 Most Used Cars in Cameroon (Price and Benefits)
In this article, we will look at the top 10 most used cars in Cameroon and try to give an idea of their average prices and benefits.
https://blogger.googleusercontent.com/img/b/R29vZ2xl/AVvXsEjArS8fJTiCdjvDWxMQJASxcGA6ZOxhWKRKvwGU1kxLI43khYGNF2XxIA2ZuUYxuJTUx5Fer50oFUIapfU3VZ-BHanMrMbZfxZ-bWcS5dBrwl3tc3bHU6ZvuD2bcw220Kcy2RbzdHNJmz0AejW_Ljd30TXQCb18UeUJMmfdhbjWxDNdlvXyHkCX8wJ4sw/s16000/10-most-used-cars-in-cameroon.jpeg
https://blogger.googleusercontent.com/img/b/R29vZ2xl/AVvXsEjArS8fJTiCdjvDWxMQJASxcGA6ZOxhWKRKvwGU1kxLI43khYGNF2XxIA2ZuUYxuJTUx5Fer50oFUIapfU3VZ-BHanMrMbZfxZ-bWcS5dBrwl3tc3bHU6ZvuD2bcw220Kcy2RbzdHNJmz0AejW_Ljd30TXQCb18UeUJMmfdhbjWxDNdlvXyHkCX8wJ4sw/s72-c/10-most-used-cars-in-cameroon.jpeg
HIPPOTECH GROUP
https://www.hippotechgroup.com/2022/12/most-used-cars-in-cameroon-price-and-benefits.html
https://www.hippotechgroup.com/
https://www.hippotechgroup.com/
https://www.hippotechgroup.com/2022/12/most-used-cars-in-cameroon-price-and-benefits.html
true
4713231046068367873
UTF-8
Loaded All Posts Not found any posts VIEW ALL Readmore Reply Cancel reply Delete By Home PAGES POSTS View All RECOMMENDED FOR YOU LABEL ARCHIVE SEARCH ALL POSTS Not found any post match with your request Back Home Sunday Monday Tuesday Wednesday Thursday Friday Saturday Sun Mon Tue Wed Thu Fri Sat January February March April May June July August September October November December Jan Feb Mar Apr May Jun Jul Aug Sep Oct Nov Dec just now 1 minute ago $$1$$ minutes ago 1 hour ago $$1$$ hours ago Yesterday $$1$$ days ago $$1$$ weeks ago more than 5 weeks ago Followers Follow THIS PREMIUM CONTENT IS LOCKED STEP 1: Share to a social network STEP 2: Click the link on your social network Copy All Code Select All Code All codes were copied to your clipboard Can not copy the codes / texts, please press [CTRL]+[C] (or CMD+C with Mac) to copy Table of Content